1. A very unusual faux tortoise shell binaural stethoscope, circa 1920, is pictured below. The stethoscope has its original tubing and the chestpiece and earpices are made from celluloid fashioned to look like tortoise shell. The  bell is a ford model that was most commonly used up to 1930 and is marked with a patent number (SOLD). 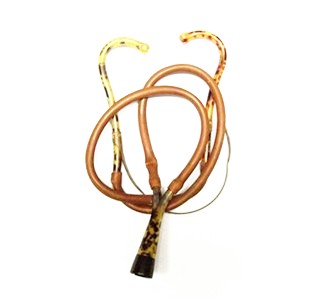 2. A metal Pinard fetal stethoscope, circa 1900. The ear piece unscrews from the stem of the stethoscope for easy carrying.

3. The monaural stethoscopes shown below are typical Civil War era wood stethoscopes used in the mid-19th century. They are adaptations of the Piorry stethoscope design and measure 5-6 inches tall with wonderful patinas from use by doctors. 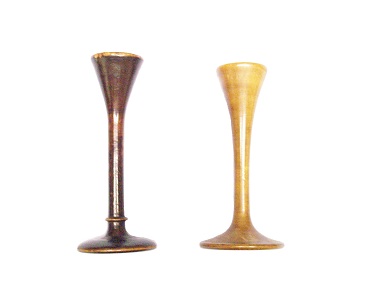 4. A 12 inch long "pauper's" stethoscope made of wood, shown below. These long stethoscopes were used to keep the infested patient a respectable distance from the doctor. Nevertheless, many physicians died from tuberculosis from frequently auscultating their patients who had this infectious disease (SOLD).

5. Displayed below are two unusual monaural stethoscopes. The one on the left is a Laennec design stethoscope with wooden ring reminiscent of the original rings of the second version Laennecs. On the right is a wooden stethoscope with a bulbous type bell to amplify sound and has the doctors name engraved on the inside of the bell. 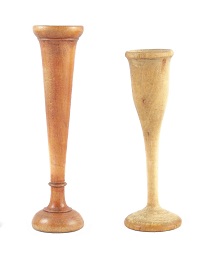 6. Shown below is an advertising stethoscope that was given as a gift to doctors. The stethoscope has the drug name "Theosalvose" marked on the top of the ear piece which unscrews from the stem for easy carrying. Theosalvose (Theobromine) is an extract of cocoa that was used at the turn of the 19th century to treat lung congestion.